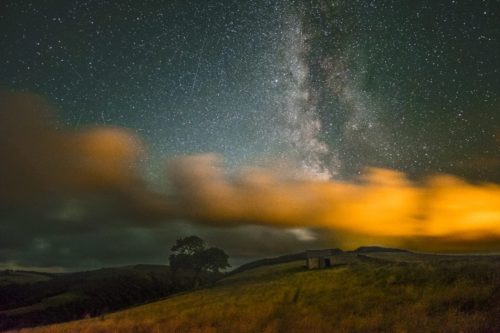 Back in 2011 Exmoor National Park was designated Europe’s first Dark Sky Reserve, an accolade thoroughly deserved for all those within the National Park who had painstakingly campaigned to achieve this status. Now almost every national park or area of outstanding natural beauty (AONB) can apply for one, but we are so proud that Exmoor took up the mantel and became the first.

The advantage that Exmoor has over many other places is the lack of light pollution, a must for viewing the stars and constellations observed from many a destination from within the core zone area of this Dark Sky Reserve.

Fast forward to 2018 and in particular the weekend of the 13th & 14th July, and the Exmoor White Horse Inn played host to the second Astrophotography Workshop that was co-led for Light and Land with our very own Peter Hendrie and photographer Andy Farrer.  The participants were very fortunate to be able to observe clear skies on both evenings allowing the group to capture stunning images of the Milky-Way above the Exmoor landscape. They spent time during the day editing images in both Lightroom and Photoshop to show each other on the Sunday before the workshop finished.

Two more Astrophotography workshops are planned for 2019, one in the Spring and the second at the end of August. Further details will be made available on the Light & Land website www.lightandland.co.uk/photography-tours/view/astrophotography in the not too distant future.