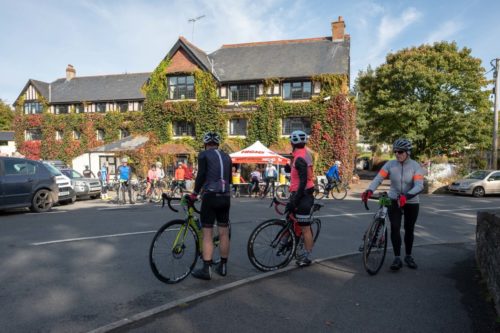 The Beast of Exmoor Returns!!!

Well this one does, in reality, but on two wheels. The annual Exmoor Beast bike ride took place on Sunday 7th October with The Exmoor White Horse Inn used as a feeder station.

The Exmoor Beast started more than a decade ago which makes it one of the original tough sportives; and certainly the oldest sportive ride in Exmoor. It was a very tough bike ride back then and the weather made it even tougher in those early years. It continues to be tough – it’s a Beast!! This year’s routes was exciting and even more challenging than recent years. It was essential that all riders had trained and were well prepared for a challenge of this kind.

Routes headed north from the Tiverton HQ and the trade-mark climb up to Dunkery, the highest point on Exmoor, coming in at 35 miles (56km); but those that had opted for the 100 mile route actually climbed higher after the Exford Feedstation where they ascended to Exmoor Forest to Lucott Moor where the road was even higher!! Hundreds of riders conquered the hills of Exmoor in this 100 mile epic event which tested the endurance of even the fittest of hardened enthusiasts, testing them to the limits. Even when a National event like the “Tour of Britain” bike ride comes to Exmoor, as it did earlier on this year, we often hear comments about how tough the stages across Exmoor are, definitely not for the faint hearted.

When the riders did stop for a breather and refreshments, we supplied them with bacon butties, hot dogs and energy bars along with tea, coffee or refilled water bottles, before they set off to complete the course.

We’d like to take this opportunity to thank our suppliers who helped with offering some of the items towards this event like D.J. Miles (Local Tea & Coffee merchants),  Alliance South West and J&R Foodservice. Working with such clients has been a pleasure for the last 30 years, building a lasting relationship that we hope will last for many more to come as we continue to  try and use local firms for all of our services.